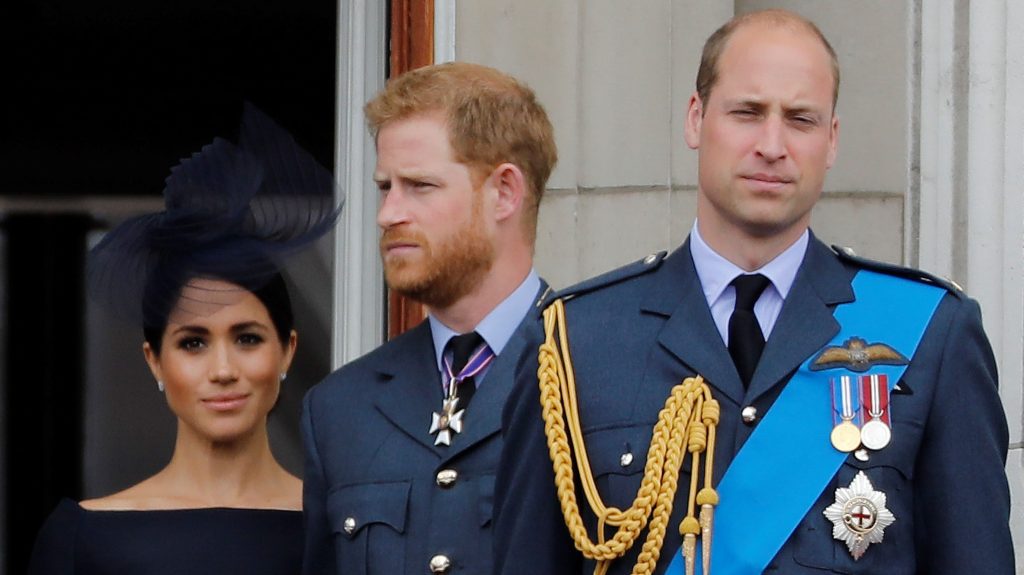 When Prince Harry started dating Meghan Markle, a protective Prince William suggested he not move too quickly. When Harry grew prickly and refused to put the brakes on his romance with the American TV actress, William asked Charles Spencer, the brother of their late mother, Princess Diana, to intervene.

“The result of the Spencer intervention was an even more bitter explosion.” writes royal expert Robert Lacey in his new book about the royal family, “Battle of Brothers: William and Harry — The Friendship and Feuds,” to be published by Harper and released on Oct. 20, 2020.

“From time to time Diana’s younger brother had played something of an honorary godfather to both boys in the years since the death of their mother,” Lacey wrote, in an excerpt of his book published this weekend in the Daily Mail. “Once again Harry refused to slow down. He didn’t blame his uncle. He understood why Diana’s brother should want to help. Yet he was furious with his elder brother for dragging other family members into the row.”

Lacey’s book details the catastrophic breakdown of William and Harry’s once-solid bond and uncovers the depths of the royal family’s anger and frustration with Harry and Meghan’s repeated breaks with protocol and their ultimate decision to go their own way and leave the royal family, the Daily Mail reported.

The book reveals how “the acrimonious fallout” between the brothers “has infiltrated every aspect of royal life,” the Daily Mail reported. For Queen Elizabeth, Harry is still a beloved grandson, but she had come to see him and wife as “erratic and impulsive,” Lacey wrote.

The bad feelings of all the parties involved “became so bad” that the queen deliberately chose not to include a photo of the Duke and Duchess of Sussex, with their son, Archie, on the table during her Christmas broadcast in 2019, Lacey wrote.

From the book excerpts Lacey has shared so far, it appears that William is the family member who always was the most wary and frustrated by Meghan. As the future king, the Duke of Cambridge is concerned about the survival of the royal family, and it’s clear from Lacey’s book that he saw Meghan as a disruptor.

After Harry and Meghan announced their departure from royal duties in January, Lacey reported that William confided to a friend, “I put my arm around my brother all our lives. I can’t do it any more. We’re separate entities.”

“The new Meghan-fired Harry clearly flummoxed him,” Lacey explained. “William’s ‘arm around my brother’ — his lifelong care for Harry — had always seemed to have been based on some element of control, and that had now surely vanished.”

Lacey wrote that Harry was smitten by Meghan’s “quirks and originalities,” which made her “such a similar character to Diana.” As Lacey said, Meghan “was a changer not a conformist.”

After Harry introduced Meghan to his father, Prince Charles, and his grandmother in the summer and autumn of 2016, they “thoroughly approved,” Lacey wrote. Meghan and Kate Middleton, William’s wife, also “got on rather well from the start,” Lacey said.

This revelation may sound surprising given the rumors that Meghan and Kate feuded, but in fact, Lacey said, the two women were both practical women and “cool professionals” who treated each other “with mutual respect.” “They might not be best-buddy material,” Lacey wrote, but they recognized that they were “sister-outsiders in their extraordinary royal situation.”

“The problem was William” Lacey concluded. In fact, the bond between the brothers soon grew so fractious that two were not on speaking terms when Harry and Meghan announced their engagement in 2017.

Charles tried to engineer a rapprochement, which resulted in William and Kate inviting Harry and Meghan to spend Christmas with them. The two couples also appeared on stage together in February 2018 as a show of unity for the Royal Foundation, the charity that William and Harry had started together to honor the legacy of their mother. The two couples were hailed as the “Fab Four.”

At some point after Harry and Meghan’s May 2018 wedding, this show of unity fell apart. Reports started appearing in the U.K. tabloids about Meghan being difficult and demanding — reports that some observers believe had been leaked by courtiers sympathetic to William.

Among other things, William grew frustrated with Harry and Meghan’s “prima donna” maneuvers to conceal details about Archie’s birth, as well as the names of his godparents, Lacey wrote. The royal family also was put out by Meghan’s decision to spend seven months with the glamorous assignment of guest editing the September 2019 issue of British Vogue, while “hardly doing any public work for the British royal family,” Lacey wrote.

Meghan’s “woke” Vogue issue was met with harsh criticism from the British press for being too political when royals are not supposed to express political viewpoints, Lacey said. Times writer Melanie Phillips called the issue “shallow and divisive” and said it was filled with Meghan’s “virtue-signaling” and “me, me, me” need for attention.

“The harsh reality was that the gospel according to Meghan — as evidenced in the special issue of Vogue she had edited — was simply not royal, nor was it in harmony with mainstream, ‘un-woke’ British opinion,” Lacey wrote. “William and all the senior members of the royal family — not least Prince Charles and the queen — had come to feel the same.”

The fallout over Meghan’s work for Vogue led to another blow: The Sussexes’s decision to snub the queen by not joining her and the Cambridges for the summer holiday in Balmoral last year. Harry and Meghan instead used Elton John’s private jet to enjoy vacations in Spain and the south of France.

The book also reveals that the royal family were “hopping mad” over Harry and Meghan’s decision to trademark Sussex Royal products and services, a move seen as “commercializing” the crown. More rancor grew when the couple failed to consult the queen, Charles and William before launching multiple legal actions against the media while on their tour of Africa last year.

Courtiers close to the queen also believed that Meghan’s interview with ITV’s Tom Bradby during the Africa tour, in which she lamented her life in the royal spotlight, was “miserably self-indulgent.”

After Harry and Meghan’s “Megxit” announcement, Harry agreed to meet with the queen, Charles and William at the queen’s Sandringham estate to negotiate the financial and logistical terms of his and Meghan’s departure. The queen had suggested the family gather for lunch before the meeting, but William refused the opportunity to socialize with his brother.

“He would obviously turn up at 2 p.m. for the meeting, he said, but he only wanted to talk business,” Lacey wrote. “The prince himself has not confirmed his friends’ speculation that he was so furious with his younger brother that he would not be able to endure the hypocrisy of smiling at him over lunch.”